One of the many joys of writing historical fiction is discovering pieces of history not taught in schools or written about in any detail in the media. Operation Paperclip was one of those. I tripped over it doing research on the Target Forces badge I found in my father’s belongings. Information from the National Archives II in College Park, MD, illuminated its significance: the Allies wished to secure Germany’s “intellectual assets,” especially in the sciences. 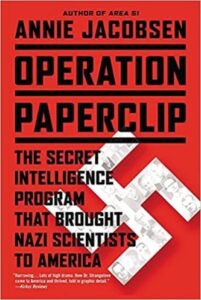 Our scientists were worried that Germany was perhaps as much as 20 years ahead of us in its research and production capabilities. The Target Forces were provided with lists of people, locations (i.e., research laboratories, government offices, military bases, businesses), and materials (i.e., V-2 rockets, advanced jet engines, chemical warfare products)—targets—that were to be found, reviewed, and possibly brought to the U.S.

As the war wound down, a group of politicians, industrialists, and scientists, designated as the Combined Intelligence Objectives Subcommittee (CIOS) met to define the targets in a wide variety of fields. As discussed extensively in Annie Jacobsen’s Operation Paperclip 1, one of CIOS’ first conclusions was that receiving pictures and copies of paperwork was insufficient. They needed to talk extensively to the people who had generated the work and bring them to the U.S. to work with our scientists and advance our knowledge.

At first, U.S. officials promised none of the Germans would be known or alleged war criminals, going so far as to suggest none had been Nazis. This, of course, was impossible, as a German scientist could not obtain a job without party membership. Not all officials agreed with the idea. The Departments of State, Justice, Labor and Commerce all objected to skipping such legal requirements as visa clearances, but their staff were eventually persuaded by the promises that the scientists would stay only temporarily. That is, they’d be here under military guard until we’d learned from them all we needed.

President Truman initially agreed to the idea and about 150 scientists came. But in the winter of 1945-46, the expanded version of CIOS became seriously concerned that Russia was ahead of us in weapons development and that a Cold War was in the offing. We needed all the German scientists we could muster to prevent advanced Nazi technology from falling into the hands of the Soviet Union. The number of German scientists brought to the U.S. expanded to 1,500 (or possibly more; records are hard to find and verify). To signal that no visa check was to be completed, the requesting staff attached a paperclip to each scientist’s folder. Thus the name of the operation. None of these scientists’ folders was subjected to the scrutiny required of other potential immigrants.

On the one hand, these scientists gave a terrific jump start to our defenses. Think about the work of Wernher von Braun and his staff’s contribution to the space race. These men eventually became U.S. citizens; von Braun led NASA. But times changed, and in 1979, the Department of Justice established an Office of Special Investigations to find and deport Nazi war criminals—and, in time, anyone who contributed to genocide and had omitted those actions on their visa applications. Our political system had shifted. One might say the criterion of morality superseded political expediency.

So, do you agree that it was right to engage fully in Operation Paperclip in the late 1940’s? To what degree should we allow the times to define our immigration policy? Should our government be required to make public such decisions about exceptions to agreed-upon policies? In February 2021, we deported a Nazi war criminal in his 90’s. Should we continue to do so?

Good historical novels often chew on such large questions. And I hope you enjoy the attention Operation Paperclip has in my novel, Chasing the American Dream! Do let me know your reactions.

And, please, do rate the novel and, if you can, post a review on Amazon and Goodreads!