Before researching my father’s assignments as a member of the Office of Strategic Services (OSS), Secret Intelligence Branch, I believed I was going to write a book about one of those classic heroes, a person who appears normal on the surface but reveals impressive powers. I imagined my dad had shown incredible physical courage, breathtaking ingenuity, a fearlessness in the face of threat, moral integrity and self-sacrifice. After all, that’s what he’d told my brother and me about his exploits when we were children. I was about to reveal my dad as an inspiration to the thousands who would read my book about him. It was an opportunity to write a spy story in the shadow of Frederick Forsyth, John Le Carre, and Ian Fleming. END_OF_DOCUMENT_TOKEN_TO_BE_REPLACED 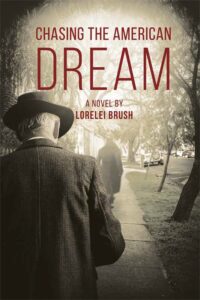 As I explained in my September blog post, until he died when I was 25, I knew my father as an angry man. He came home from teaching high school many nights spewing his unhappiness. His students didn’t really want to learn; too few bothered to do the assigned homework; his principal was an idiot. As we’d pull out of the driveway on an errand, he’d notice someone left an upstairs light on and yell: “Do you think I’m made of money?” END_OF_DOCUMENT_TOKEN_TO_BE_REPLACED

END_OF_DOCUMENT_TOKEN_TO_BE_REPLACED

Today’s newsletter is longer than usual, as I’d like to give you the first scene in my new novel, Chasing the American Dream. I’ll talk more in a later newsletter about where this novel came from but know now that it started with my curiosity about my father’s role during World War II. He’d signed an oath at the end of the war that he’d never speak of his activities in the Office of Strategic Services. Finding out what he actually did took me months in the OSS Archives. All those details are for another time. Right now, just enjoy the novel that came from that research. END_OF_DOCUMENT_TOKEN_TO_BE_REPLACED

END_OF_DOCUMENT_TOKEN_TO_BE_REPLACED

Several readers of Uncovering have asked about the status of women in Pakistan: Is there a women’s movement? Is it just in the northwest areas of the country that strong conservative beliefs about women’s role prevail? How prevalent are the conservative voices? I’d like to use the example of the celebration of International Women’s Day 2020 to address these questions. END_OF_DOCUMENT_TOKEN_TO_BE_REPLACED

One of my readers asked if I intended to write a sequel to Uncovering. I don’t. So, she asked, “What happened to Shahnaz?” I thought it would be fun to speculate, given what I know and love about this character—and some of the others in the story. END_OF_DOCUMENT_TOKEN_TO_BE_REPLACED